It’s time to wake up. On Global Climate Day of Action, VICE Media Group is solely telling stories about our current climate crisis. Click here to meet young climate leaders from around the globe and learn how you can take action.

In 2020, single-use plastic has become a double-edged sword. Face masks, PPE suits, and gloves are essential to protect healthcare workers on the frontlines, but the increase in disposable materials is disrupting already overwhelmed waste management systems. The problem doesn’t just come from hospitals, but homes too. People continue to avoid public spaces, turning to online shopping and food deliveries that arrive in plastic containers. These unsustainable practices have long been seen as problematic, with the largest amount of plastic waste coming from the packaging industry. But it is only getting worse.

In July, a public opinion research conducted by YouGov and sponsored by international conservation non-profit Oceana found that Amazon users in the United States have been shopping online more since the beginning of the pandemic. This, even though over 40 percent of the 1,286 respondents acknowledged that they were “bothered” by the extra plastic packaging they were receiving.

In the Asia-Pacific region, 58 percent of consumers increased their online shopping frequency during the pandemic, according to a survey by software company Adobe. Another by U.S.-based management consulting firm McKinsey & Co found that Asian countries showed a 16 to 70 percent increase in online spending on food.

Global watchdogs such as the World Economic Forum (WEF) flagged this surge of dependency on plastic, both in the medical industry and shopping, in May. The increase in single-use plastic is bound to trigger “new public health crises,” said the WEF report, especially in developing nations, where mismanaged waste either collect in town centers or leak into rivers and oceans. This is especially worrying, given that the world was already disposing of 29 million metric tons of plastics into the oceans every year, even before the coronavirus outbreak. 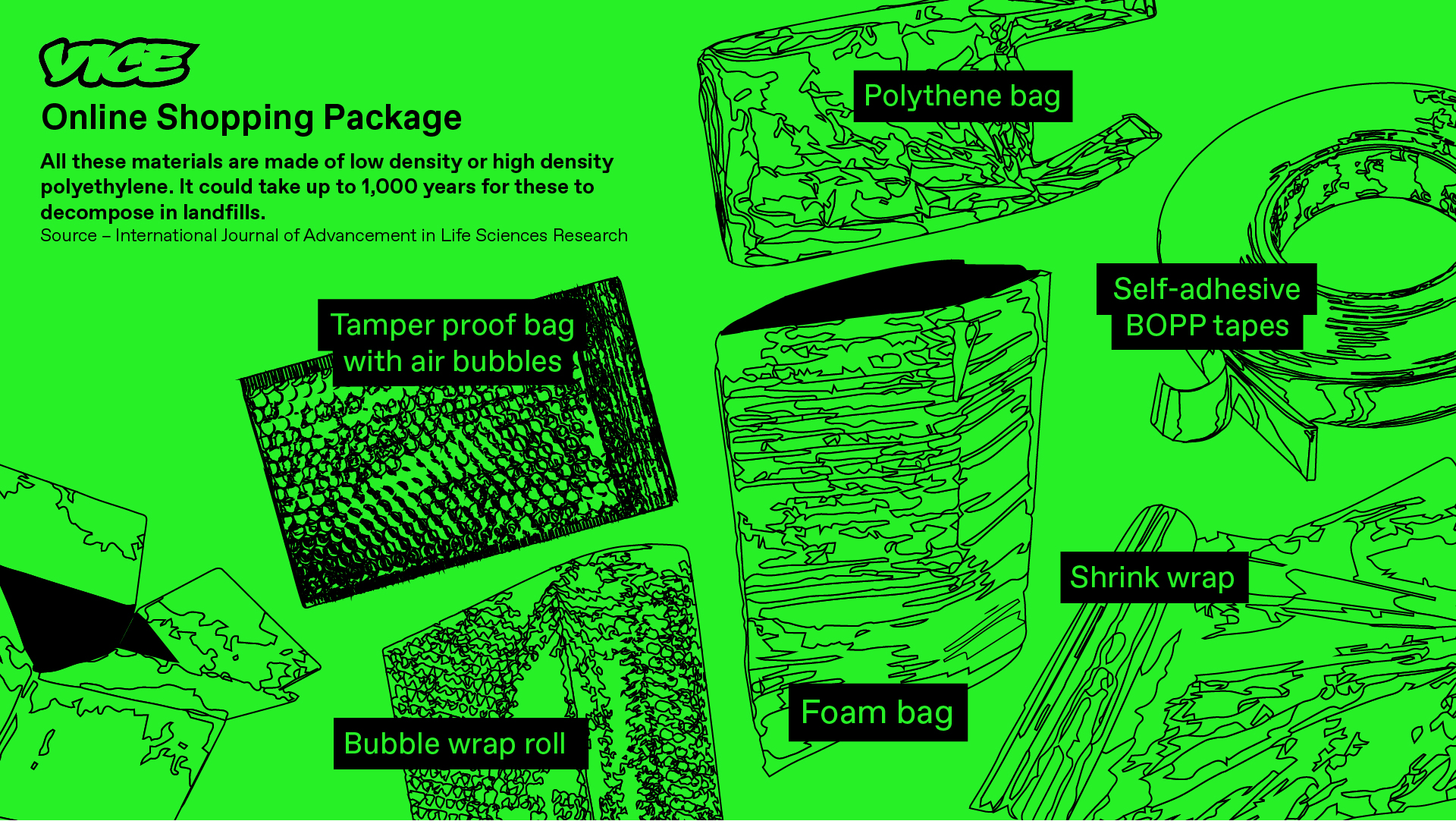 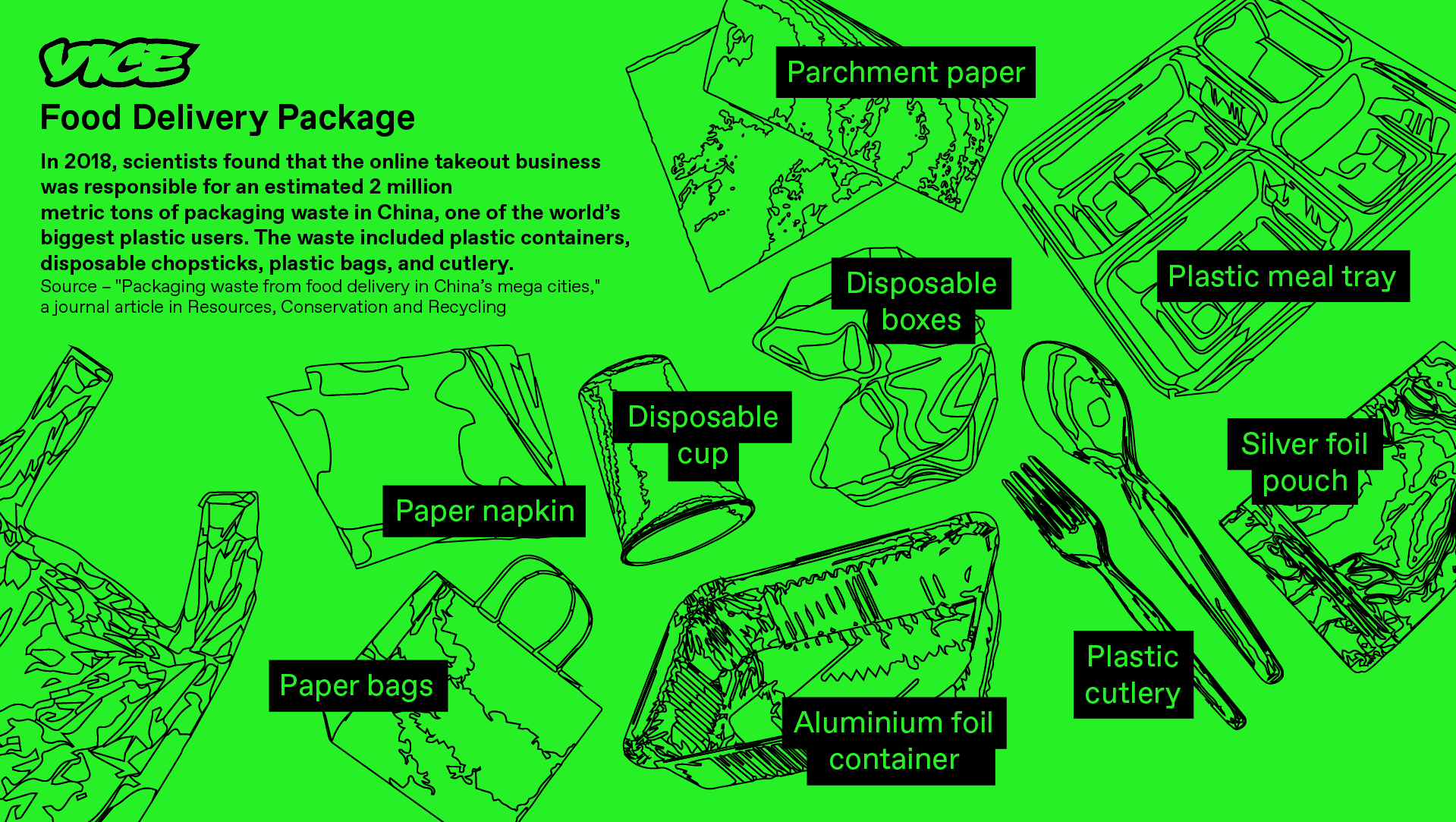 More often than not, these packages contain single-use materials like bubble wrap, foam meal trays, or disposable cutlery. When not disposed of properly, these eventually devolve into microplastics that end up in the oceans, the soil, sea animals, and eventually, our bodies.

Recent studies have shown that an average human adult eats and breathes at least 50,000 particles of microplastic a year. In fact, they’re accumulating inside human bodies at an alarming level.

Some studies found that Asia produces over 50 percent of the world’s plastic, while Southeast Asian countries are known to be major contributors to land-based plastic leaking into oceans. These are brought on by various factors like poor waste sorting mechanisms and disposal systems, along with population growth and increasing demand for consumer goods that come with plastic packaging. But it’s far from a regional problem. Many of the plastic packaging used in Asia come from multinational companies based in western countries. Environmental organizations have also pointed out how Asian countries have become a “dumping ground” for waste from rich western countries.

Countries in Asia have responded to the problem in various ways, some more effective than others.

Around 27.8 million metric tons of solid waste is generated in Thailand — a country of approximately 69 million people — every year. Of that, plastic waste accounts for 12-13 percent.

Waste management experts have warned that Thailand is becoming “the garbage bin of the world” because of the huge amounts of plastic waste they imported from countries like Japan, Hong Kong, and the U.S. Today, it is counted among the top five countries for throwing plastic waste into the oceans.

In 2017, the country pledged to reduce its plastic waste by 2030. Early this year, they even banned single-use plastic bags in major stores, and are contemplating banning plastic waste imports entirely by 2021. However, since the pandemic started, the government admitted that the fight against plastic waste has “gone back to square one” because of increased food orders. Delivery services such as Line Man and Grab reported 300 to 400 percent growth in order numbers during the beginning of lockdown.

To tackle plastic, the Thai government vociferously favour waste-to-energy plants, but some experts believe this would only encourage plastic use and more imports of waste. There is a plastic bag ban, too, along with an unusual decision to censor plastic bags on television. Singapore is one of the cleanest countries in the world. Yet, the Singapore Environment Council (SEC) found that Singaporeans use 467 million PET bottles and 473 million single-use plastic items every year, including disposable cutlery and containers found in restaurant takeaways. A small survey conducted between April and May, during the country’s lockdown, found that Singapore’s 5.7 million residents discarded an additional 1,334 metric tons of plastic waste from takeout packaging and food delivery, equivalent to the weight of 92 double-decker buses.

According to the SEC report, only 4 percent of all plastics used in 2018 were recycled. It also found that the average household produces 1.56 metric tons of waste annually — a third of which is single-use plastics and food packaging, which is equivalent to 10 Olympic-size swimming pools. In 2019, Singapore sent 3 million metric tons of waste to Semakau Landfill, the country’s only remaining site, out of which 30 percent was plastic. 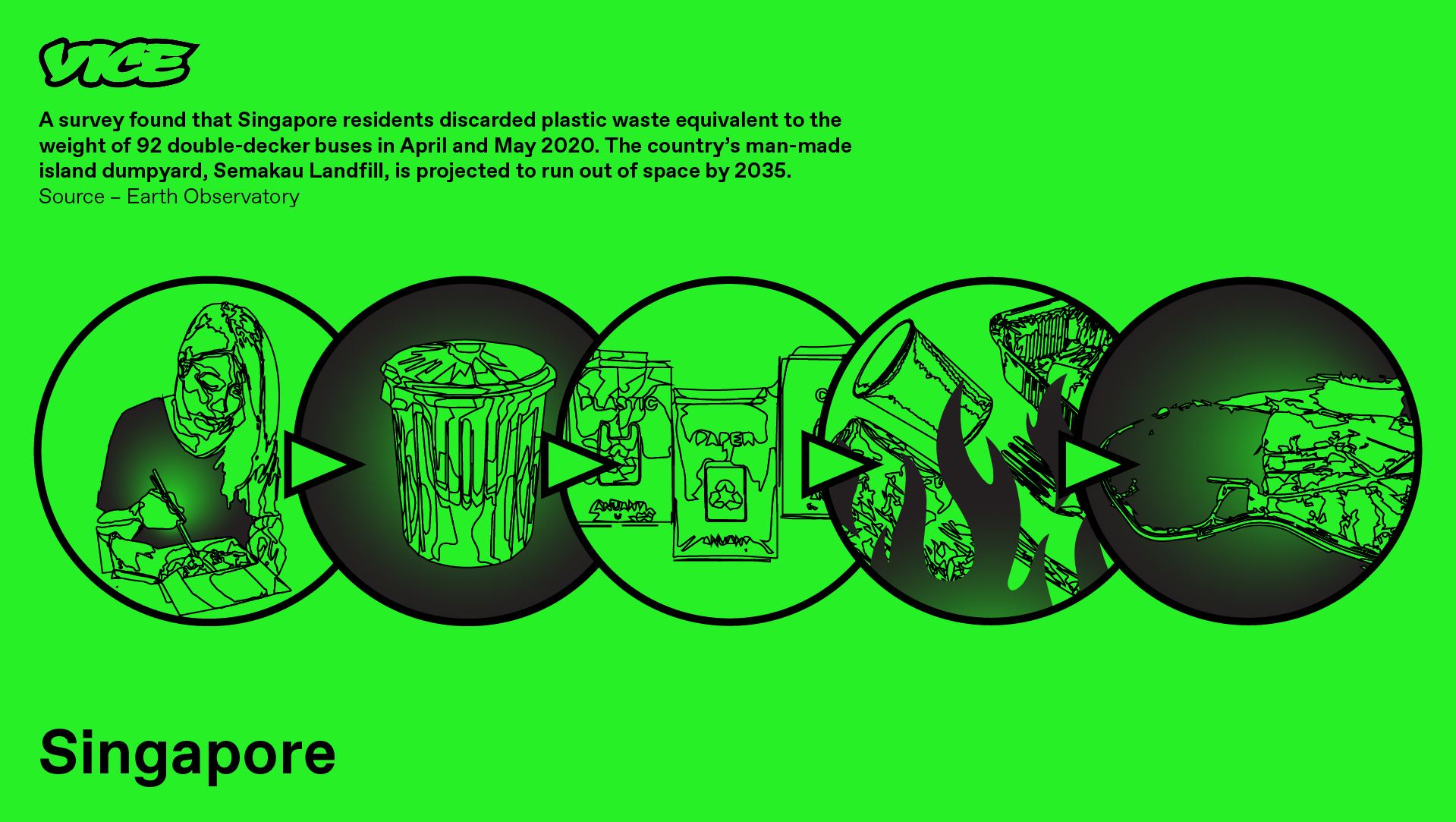 Thin shopping bags made of polythene make up the largest part of single-use plastic in Bangladesh during the pandemic. Studies from before the outbreak found that the capital city of Dhaka alone uses 14 million pieces of these bags every day. Many of them end up in the rivers and the ocean. This, despite a ban on polythene bags established in 2002.

According to a study by the Environment and Social Development Organization in Bangladesh, the country generated around 14,500 metric tons of hazardous plastic waste from single-use surgical face masks, hand gloves, and polythene bags from healthcare facilities during the pandemic. This plastic waste emerged in just the first month of COVID-19 lockdown.

Another report shows that the country was already generating around 3,000 metric tons of plastic waste daily, before the pandemic. The pandemic reportedly increased the use of polythene bags “at an unprecedented rate.”

A 2019 study by the government's Department of Environment and NGO Waste Concern found that  Bangladesh recycles 36 percent of its plastic waste in the informal sector, dumps 39 percent of it in landfills and leaks 25 percent of it to the environment, which finds its way to the Bay of Bengal. 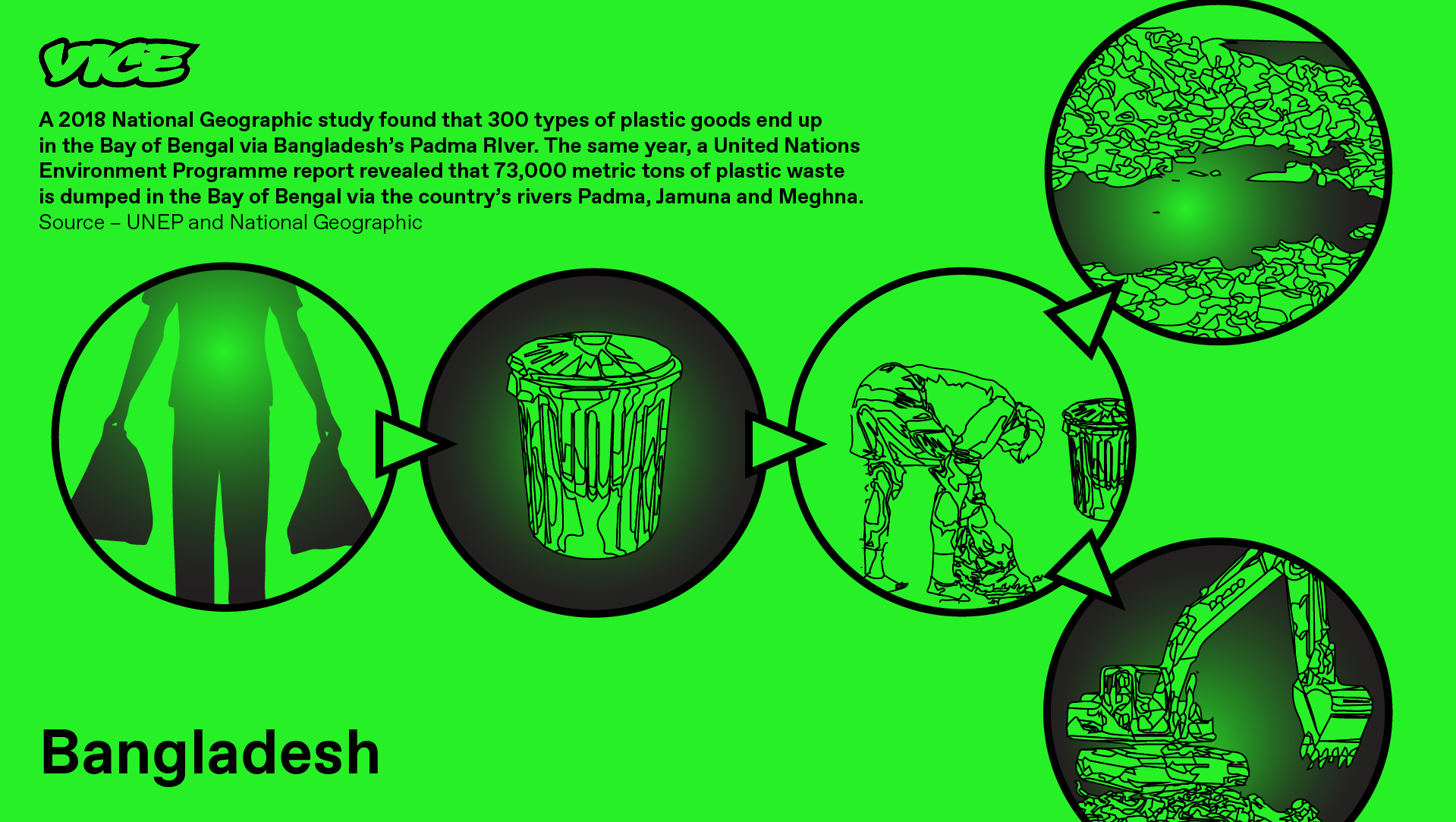 The Philippines has been tagged as the world’s third-biggest polluter of plastic in the ocean. According to a 2015 report by environmental advocacy group Ocean Conservancy, the country generates 2.7 million metric tons of plastic garbage every year. In 2019, a trash audit by the Global Alliance for Incinerator Alternatives (GAIA) found that Filipinos were throwing away 48 million plastic shopping bags, 45 million thin-film bags, and 163 million plastic sachets every day.

While the COVID-19 lockdown has led to increased concerns and awareness about the amount of plastic generated in Filipino homes, social distancing policies have also made some cities scale back their fight against plastic. The city of Paranaque, which lines the Manila Bay, delayed its full implementation of a single-use plastic ban from June 2020 to January 2021 after businesses said they could not follow this considering the lockdown’s impact on the economy. Quezon City, the largest city in Metro Manila that’s home to about 3 million people, also relaxed its policy against single-use plastics. 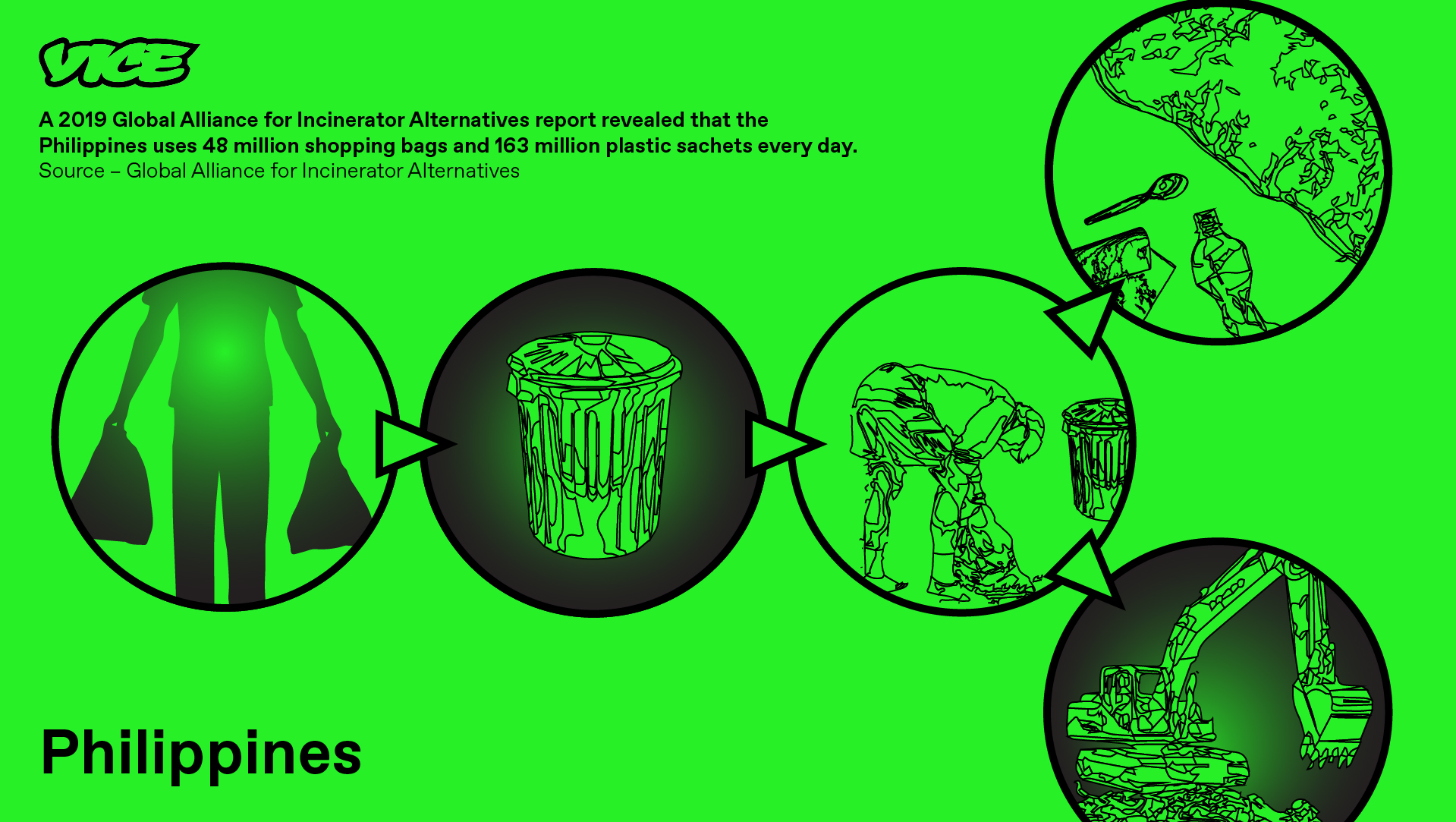 Welcome to the Coronavirus Topic Hub

This topic hub is a Coronavirus news and information resource which contains 3 primary indexes:

This topic hub is and will remain Free to use.